The "Old School" mod of choice..

Modifications to the inject duration maps are a key element of "old school" tuning.
The main reason this is done is because the injector open times looked from these maps are not modified - excepting for adjustments for injector performance codes - before being sent to the injector control code. If a tuner modifies these maps there are no problems with "unknown" limiters restricting the requested IQ, and there is no need to account for map variations between Defender, D2 Manual or D2 Auto. It makes life very simple.

The inject duration maps come in two variations - one for EU2 motors with lower pressure/larger fuel droplet injectors and one for EU3 motors with high pressure/smaller fuel droplet injectors. In other words a ROW Defender 110 and Euro D2 with Auto running the same variation of the motor/injectors have identical inject duration maps. Basically these maps are calibration for the behaviour EU2 and EU3 injectors and how droplet size of the injected fuel effects the burn characteristics, and translate a request for a specific Inject Quantity into the opening time required to deliver the requested amount of fuel.

The Duration maps are selected on the basis of overall Start of Injection timing. The maps define duration at 0, 5, 10 and 25 (EU3 only) degree advance with the ECU interpolating values between the maps for intermediate values.
In effect the 3 or 4 individual maps create a 4 dimensional table with advance as the 4th dimension.

The idea that the duration maps are calibrated to deliver the correct amount of fuel for a specific Inject Quantity request is a fundamental idea to "new school" tuning. The Driver Demand, Smoke Limiter and Torque Limiter IQ values are set on the basis that if the ECU requests 35mg of fuel at 2500rpm, the injectors are going to deliver 35mg. Altering the duration maps as a method of tuning destroys that relationship, in that a request for 35mg at 2500rpm might deliver 40.25mg by increasing the length of time the injector remains open.

I should note that the calibration maps are not an exact linear relationship of IQ request to duration. Duration values are influenced by the behaviour of the combustion chamber, scavenging of exhaust gases and the fuel droplet size so seem to incorporate a degree of fitting to the engine design.

Fortunately with the EU2 motors the duration maps extend well past the normal operating range, so it's relatively straight forward to get away without adjusting the duration maps. The EU3 motors present a far greater challenge as the duration maps are truncated to just above the expected operating maximum of approximately 50-55.00mg/stroke, so need to be modified to extend the range of usable IQs.

The EU3 mods I have in mind are currently untested and will require at very least a Wideband O2 sensor to verify "what you request is what you get". In general terms the idea is that the upper column needs to be altered by extrapolating based on the increment and value increases present in the EU2 maps. Again the idea is not to make broadscale tuning mods, but to allow the injectors to deliver the amount of fuel requested.

Due to the differences in table breakpoints (axis values) it's a bit tricky to compare the EU2 and EU3 duration maps. By interpolating the values from the EU2 duration maps to match those of the EU3 maps it's possible to get a sense of how different the Duration maps actually are.

The following image shows the difference in cell values between the EU3 "0 degree" duration map and the EU2 "0 degree" duration, which has been interpolated to same IQ Request values. The last two columns of EU2 map are repeated to approximate the EU3 final column.

Interpolating the EU2 durations for the 70mg IQ request column gives an indication of where EU3 duration would fall if the final column did not repeat the 50mg IQ request. The EU3 durations are shown in red, and EU2 interpolation in light grey. It's apparent that across most of the map the EU2 duration values are slightly higher. The most obvious exception is the low rpm range. 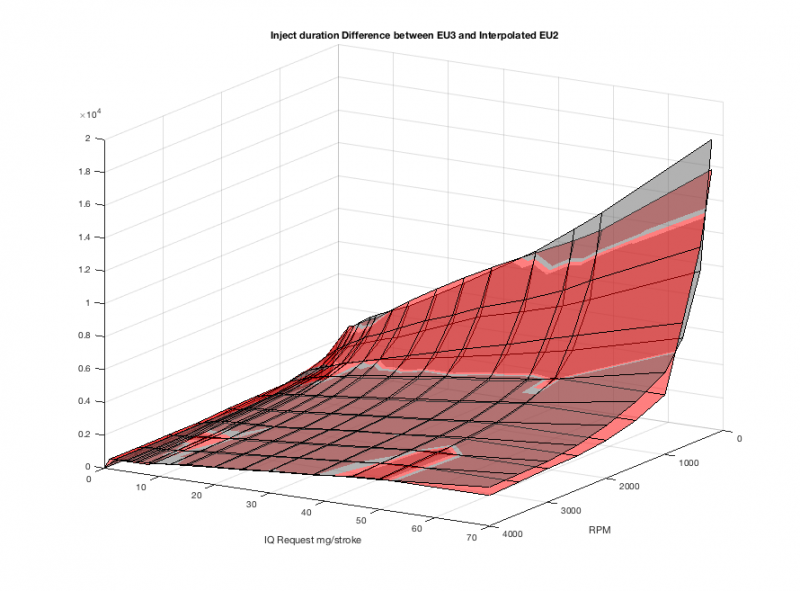 The idea is to correct the last column of the EU3 maps to remove the limiting LR has designed in by repeating the 50mg column values. This limiting is not present in the EU2 maps so interpolating based on the curve of the EU2 maps in this region gives us an fair approximation of correct values.

The image below shows the type of correction of the last column required to make the "new school" maps work on EU3 motors. 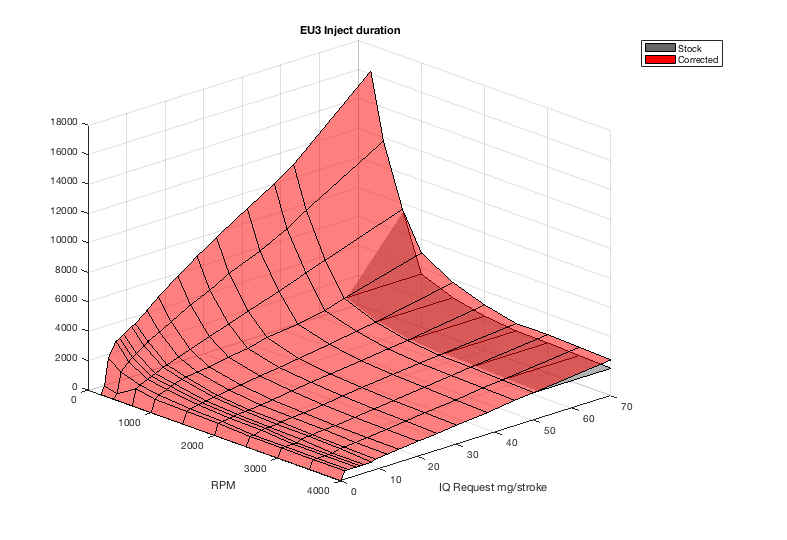 The end goal is to have the injectors deliver fuelling that matches the IQ requested.